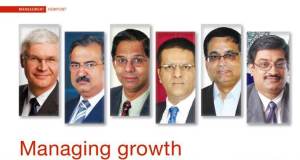 The trade magazine on Efficient Manufacturing
Questions for Editorial Advisory Board comments
A view from abroad:
Changes in Indian Economy is often described as analogous to the movement of the elephant – slow, steady and often aimless!The slow and steady nature of the changes in Indian economy is often seen as a welcome and reliable opportunity, compared to the rapid and volatile changes elsewhere. However the aimless nature of the economic changes in India, often mask the gradual and sustained growth of the middle class in India and their growing consuming power. It is this internal capacity for consumption by the middle class that bodes well for the long term sustained growth of the Indian economy and in turn its manufacturing base.
It is doubtful if the manufacturers who are committed to this domestic consumption alone, can ever compete in the global market. There is a term used such as “best in class for India”, which suggests a lower level of quality, precision, reliability acceptable to the Indian market and its internal customers. “Good is good enough and best in class is for the imported items” mindset has to change, for the Indian manufacturers to compete in the global market place. While the US manufacturing is showing signs of improvement, there is a depleted manufacturing base thanks to relentless outsourcing and off shoring for the past three decades. This has created a void for precsion components, accessories, tooling and machine tools for many critical manufactured goods. While small and medium manufacturers in US will strive hard to regain this void, there could be an unique set of opportunities for Indian manufacturers with world class quality in their veins.
Dr. K. (Subbu) Subramanian
President, STIMS Institute Inc., USA.
(A Knowledge Integration Company).

The context
US manufacturing output has bounced back in February 2013, the latest signal of strength in an economy that is showing clear momentum after a near-stall at the end of last year. Industrial production grew 0.7 percent last month, as per the Federal Reserve. Economists expected industrial output to rise 0.4 percent. However, manufacturing output rose 0.8 percent during the month, snapping back from a decline in January.
Similarly, showing green shoots of recovery, Indian industrial production inched up 2.4 per cent in January mainly due to perk up in manufacturing output and enhanced power generation.The factory output, as measured by the Index of Industrial Production (IIP) had grown by 1 per cent in January 2012.
With these clear signs of recovery in the US & Indian manufacturing output, do you see India’s manufacturing furthering on a positive note in 2013-14?
Please reason your expectations & recommendations in about 200 – 250 words.