Did anything go wrong?
or
Do we refuse to accept the reality of the Binary Economy?

In a recent TV Interview http://www.msnbc.com/the-daily-rundown/watch/economic-model-failed-in-2008-says-greenspan-94106691726 Mr. Greespan stated that he has been working on an ideology for more than forty years that “people behave in their own self-interest”. He has now come to the conclusion that this assumption is wrong or false.
Before rejecting the well-established principles of classical economics, it may be prudent to look at such conclusion in light of the rules of operation in the Global Economy. What happens when the playing field for the investors is across the globe (which includes capitalism, socialism, communism and dictatorship and everything in-between), while all the workers – wage earners – are constrained to the opportunities limited to the national boundaries and the rules and regulations pertaining to the country they live in? Have we come to a point, where the needs of the investors and the needs of the community or nation where the investors live are no longer congruent? Under these new rules what does self-interest really mean? May be there are two self-interests: of the investors (across the globe) and the wage earners in each country ? May be they are mutually exclusive? May be they are binary?
Mr. Green span correctly concluded that the “Income in-equality is very significant. There are two segments of the population: Those who earn their income through wages and salaries, who are also called as production and non-production workers. The income for the average worker in any category has been flat and extremely dampened; Then the second category of workers who gain their income from the value of the assets. The income for this category – the investors – have been climbing steadily”.
When asked what to do about this, Mr. Greenspan replied, “It is mostly the Government acting in a manner that is creating the uncertainty and the sluggish US economic growth. No simple Government program will change the income inequality”.
Somehow he believes that under right climate the investors will find their courage to invest aggressively to grow the economy in a way that creates prosperity for all. He fails to ask the questions: Why it is not in the self-interest of the investors to continue to reap more rewards? Why is it in their self-interest to do something to address the income in-equality? In the Global Economy, the investor’s self-interest to acquire more wealth across the globe and the prosperity through high wage workers in larger numbers may be in conflict with each other?
The reality is that we now live in a Binary Economy. In this economy there are four distinct classes of workers: The physical laborer (the worker in Walmart who stocks the shelves or the worker in FedEx distribution center who sorts the boxes or the worker in McDonald’s who flips the burgers); the Information worker (who works in call centers and those who follow the script given to him/her), the Professional who creates and implements something new all the time and gets paid for it and finally the Investor. 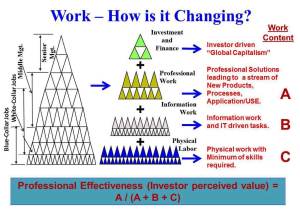 Of these four, the first two groups – physical labor and information worker – who are also generally the poor and low income workers will see stagnant wages since they bring no additional value in this new economy even through their years of experience. All their jobs will continue to be relentlessly de-skilled, standardized and automated (through programmable automation like the drones to deliver packages or self-guided robots). That is the power of the evolutions in Digital technology. The Genie is out of the bottle. There is no way to put it back in the bottle! Their chance of getting ahead in the economic ladder and growing into a middle class are less to none, as the statistics for the past few decades bears out. Increased minimum wages and social safety net may be their only way out. Only Government programs can change their economic lot.
The global finance, a version of Global Economy is also here to stay forever. Hence the investors will continue to do well, since their playing field and resources accessible to them are not limited to any one nation and its boundaries. This so called global capitalism is also enabled thanks to Digital Technology. Those with some non-wage income – through mutual funds, 401K investments, etc. – will do well as they chase the coat tails of the rich investors.
This brings us to the last group – the professionals. There were the days where the professional invented one new product or had the tricks up the sleeve for one process or some special know-how. Since it was in his/her head or in the private file folders, investors needed them for life time. Not anymore. As soon as they have documented their idea, it is available for everyone to use, across the globe, thanks to Digital Technology enabled capabilities. They need to start on the next one and continue this chase relentlessly. Their economic future will largely depend on: do they choose to be passionate to identify and create and implement a relentless stream of new solutions? We call this passion and the skills required for that as the Transformational Skills. If yes, they will be seen as valuable by the investors and hence may continue to climb the economic ladder. Or, do they choose to be a one trick pony and after that merely take orders and carry out assigned tasks? If yes, they will be mercilessly pushed into the category of low wage information workers, consistent with their low value addition. Investors will have no mercy for their economic wellbeing. It is only rational and consistent with the basic principle of classical economics: People behave in their own economic self-interest.
It will require Government to protect the self-interest of the workers whose income comes from salaries and wages. These are also the large body of the middle class as well as the consuming public in any nation. They are not the traditional unionized workers. They are everyone but the investors. They are the 99%
The Government can be the intervener creating programs that educates everyone on their self-interest to become “Transformational”. It is not a matter of more of the same education. Instead it has to be more and yet different education. Government can also start programs that create employment in areas where the investor’s self-interest may not be the driver. These include seed efforts for exploitation of new areas for economic activity, Research and Development investments to explore basic sciences – to expand advancements in the technology base beyond Digital technology, health and environmental sciences, infrastructure investments, etc..
It may not be the uncertainty of Government policies that is slowing the US economic growth. Investors always will know how to take risks, whatever the climate they face. It is in their economic self-interest to do so. The key question to address may be: Have the wage earning workers learned the rules of the new game?
We now live in a Binary Economy. Job-less recovery, high reward for investors from across the globe, high wages for a selected few – also from across the globe – who deliver a constant stream of new solutions, productivity growth through the work of these few that eliminates the need or lowers the wages for many more workers and resultant income in-equality are the basic features of this economy. In this new economy, growth in terms of GDP and low unemployment or decreasing the wage gap may not be congruent.