As the 2016 Presidential race gets into next gear it appears that everyone running for the high office wants to do something to address the increasing gap between the rich and the poor. For Republicans it means giving more tax breaks for the rich and let the benefit trickle down. Democrats suggest it is a matter of increasing the minimum wage, free higher education, better safety net for the poor and paying for all that by taxing the ultra-rich.

Any discussion in the Republican circles on lifting the poor out of poverty gets mired by suggestions of “class war fare”, while majority of the “Reagan Republicans” – the lunch bucket working class – are seeing an erosion of their wages, income and living standards.

For the Democrats like Bernie Sanders it is a moral issue. As he puts it, “Let us wage a moral and political war against the billionaires and corporate leaders, on Wall Street and elsewhere, whose policies and greed are destroying the middle class of America”.

But is it possible that the rich are no more greedy now than they ever have been? May be the control of Washington by the Wall Street is no more or less than it has always been? Are there other reasons for the growing income gap in America?

We see a separation of jobs of the industrial economy into four parallel and distinctly separate layers: Finance, Professional, Information work and physical labor. This is schematically illustrated in the figure below: 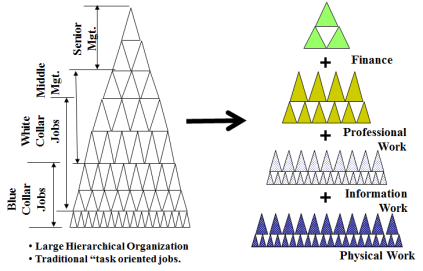 In a recent book titled The age of acquiescence, the author describes the industrial revolution, where the investors were getting more of the new found riches. The workers organized into unions and demanded a better share for themselves. This resulted in the thriving middle class. Since the 1980s, in the age of “High Tech” when the income gap has also been growing, the workers have become sullen and have given up their rights to fight. They have acquiesced to a life of lower wages and benefits suggests the author.

A Large majority of the jobs during industrial revolution were based on information and physical work and some combination of the two. As the workers contributed to the outcome – the industrial output – they had the clout to fight back for better wages. Without the workers the industries and factories could not be run. Hence the union had the power.

Since the 1980s – since the advent of Digital Technology – information work and physical work can be automated. Now they are cheaper, faster and better with fewer workers required. The gain in labor productivity claimed as the positive outcome of globalization has been largely through elimination of human work in developed nations. Even the low cost off shore labor is likely to be replaced in the future by more information systems, robotics and programmable automation. Unlike the workers of the Industrial age, the current work force has little or no influence on the economic output. For them accepting lower wages and benefits is an economic reality. It is not a matter of surrender or acquiescence.

Creating jobs at sustainable living wages is not a business priority now. This is the time when the human resources are not needed thanks to “Technology”. However jobs that pay well and create a middle class is more than simply a matter of sharing the wealth from the rich to the needy. In the words of Vice President Joe Biden, “A job is a lot more than a paycheck. It’s about your dignity, it’s about your place in the community, it is about who you are.” Mr. Biden may or may not enter the presidential race. But, his words must be the calling for every contender in the race from either party.

The evolution of income for each layer of work and how it separates between wage and non-wage income is shown schematically in the figure below. Non-wage incomes come from bonus, dividends, securities trading, hedge fund income, etc. May be what we see as the gap between the rich and poor is really the gap between the “wage” Vs. “non-wage” income? May be the debate should be on the taxation of “non-wage” income and how to use that to pay for creating new higher wage jobs? 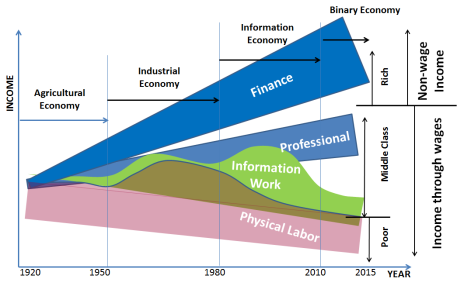 Mr. Sanders in the last debate suggested that “College education today is equivalent to the high school education of the past. Hence college education must be made free for all”. What happens if the number of jobs created for knowledge work – “professional jobs” – is far fewer than the jobs eliminated through “Technology”? In this case, merely graduating all high school graduates with college degree may only add to the cost incurred and higher unemployment without the benefits expected?

Not all professional jobs with good wages require college degree. These professionals may come from high school, community colleges or universities. But every one of them will be required to be System Thinkers and Solution providers. They should be capable of doing what the computers and networks cannot do. This may require a special set of skills – the Transformational Skills – to identify, develop and deliver a stream of new solutions, in whatever job one is employed. Investment in such education may not be large, but the payoff will be far higher than merely opening up the colleges for free. More of the same education, even if it is free may serve only a very few in the end.