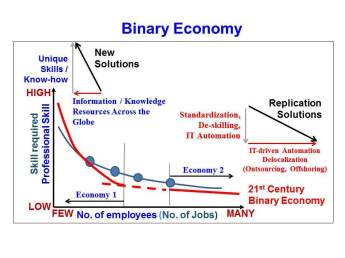 What does Brexit mean for you? The answer depends on who “you” are? The exit of UK from the European Union is reported as a large calamitous event. One may wonder why there is such a great concern now for this internal decision by the citizens of UK?  After all companies routinely make decisions to   dissolve their mergers with other companies. Not all such decisions are wise or well thought out. But the owners of such companies – the share holders have the right to do so. No one would question their right. In a democracy the citizens are the owners of their country. Hence the decision by the British citizens is nobody’s concern except their own.

The above would be very logical as long as everything can be looked at only through the lens of owners and their rights. But nations are not mere business entities. At the same time we must also note that companies are not citizens, despite the decision by the SCOTUS. One must acknowledge that SCOTUS did not declare corporations as citizens in all aspects including the human and emotional aspects of citizens.

The decision by the Brits to exit the EU is the reflection of the pain and anger of those who have been left out or left to fall down in their economic standards and opportunities for the past four decades. We have described in great detail that Globalization is not the cause but a mere effect of indiscriminate deployment of Digital Technology to merely cut costs in all areas of economic activity.

This has dramatically affected workers largely dependent on Information work directly.  This has also indirectly affected physical labor in high wage nations by de-localizing their work to low wage economies.  The combined effect is the collapse of the middle class in developed nations. These affected populations express their anger and anguish in different ways. In US these are the angry supporters for Donald Trump and the relatively reflective supporters of Bernie sanders. The later also include naive  students who believe in “free” college, with out asking where will be their jobs after they graduate?  In UK it is the disgruntled middle class who voted for the Brexit in a narrow margin over those who wanted to continue to be part of the EU.

Irrespective of who “You” are, the present form of Globalization is unsustainable.  There can not be one rule for the investors to use their money to make more money across the globe with out regard for the impact of their decisions on local economy, while there is a different rule for workers whose rewards, taxes and employment opportunities are limited to the confines of their national boundaries. This is not a problem for the UN to resolve!  Workers can not work across the globe and park their profits overseas without paying due local taxes, but the corporations can and do. Whose responsibility is it to bring about an economic equity between the workers and the investors across the globe and independent of national economic models (such as capitalism, socialism, communism, etc.)? These questions go unaddressed and it has perpetuated over the past four decades, which is the problem. Hopefully exposing this weakness and inability of economists and policy makers to address this may be what Brexit means for you?