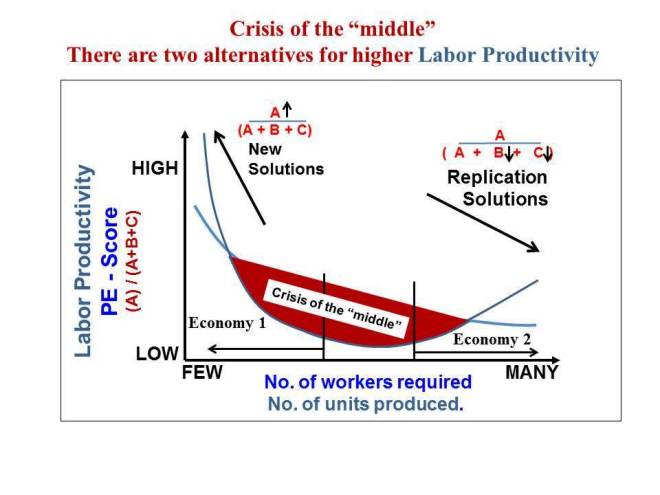 Every wage earner contributes to three kinds of wage earning effort: Knowledge and its use (A); Information work (B) and Physical Labor (C).

There are claims that the current low wage economic climate in US is a refection of poor US education, need for higher college degrees, weak unions, …. These traditional arguments miss a couple of fundamental issues. They are:

Weakness in all of the four points are leading to a low or stagnant wage labor, with a collapsing middle class.

We address this fourth point in this essay as it pertains to the role of strong/weak labor unions. When the labor is strong in terms of its direct and identifiable contribution to the GDP, then unions will find their role and strength. It is like blaming the security guard in a bank, when there is no money left in the vault! The money is not stolen, but it has been used up and not replenished.

Following is a quote from a recent NYT article.

More than 151 million Americans count themselves employed, a number that has risen sharply in the last few years. The question is this: What are they doing all day? Because whatever it is, it barely seems to be registering in economic output. The number of hours Americans worked rose 1.9 percent in the year ended in March. New data released Thursday showed that gross domestic production the first quarter was up 1.9 percent over the previous year. Despite constant advances in software, equipment and management practices to try to make corporate America more efficient, actual economic output is merely moving in lock step with the number of hours people put in, rather than rising as it has throughout modern history.

Productivity is one of the most important yet least understood areas of economics. Over long periods, it is the only pathway toward higher levels of prosperity; the reason an American worker makes much more today than a century ago is that each hour of labor produces much more in goods and services.

In our opinion this confusion exists because of the long held conventional views on labor productivity.

There is a traditional view that everything that is done to increase the productivity in one nation has to reflect in the GDP of that nation. If this were true that the rate of growth in GDP in countries like India and China will reflect a far larger labor productivity in these countries  than that in USA.

Why is this dichotomy?

Today labor productivity – PE Score – can be measured as the value added effort by the employee / Total Effort. Value addition is achieved through the skills of the work force to create “New Solutions”. Value addition can also be through their workers in terms of their contribution to pass along information or pick and place or move things (Physical labor). This later kind of labor activity which is disappearing is illustrated well in the GE Commercial.

New Solutions can be created and implemented  using labor and the productivity here will be much higher. This can be judged by the output / employee in companies like Apple, Google, Tesla, Space X. The labor productivity in manufacturers in USA are much higher (as noted above) because of the very low content of information work and physical effort (replaced by IT systems and automation) per employee.

What does this mean in terms of graduates and their earning potential? Simply graduating from colleges and looking for new jobs is not enough. They need a collection of three sets of knowledge: Academic education from the college, application oriented experience or training and Transformational Skills to identify, develop and implement New Solutions.