With the advent of the New Year, the presidential campaigns will certainly move into next gear. The economic anguish of the Bernie Sanders supporters and the rudderless fear of the Trump supporters have been the driving forces for much of the discussion in 2015. Of course the media circus and bigotry of certain candidates need no further elaboration.

In a recent TV interview Senator Bernie Sanders has correctly pointed out: “what we’ve got to do is come together and say, ‘Why is it that the middle class is disappearing” Sanders said. “And sometimes Chris, to be honest with you, it can’t be done in a six-second sound bite.”

We agree with Mr. Sanders. Slowly but surely the campaigns have to articulate the fundamental economic model at work and how it affects all of us.

We have described that Binary Economy as the driving force behind the collapsing middle class and the growing wage and income disparity. This Binary Economy fueled by the evolutions in Digital Technology is described in detail in our book and other writings (see links) https://stimsinstitute.com/2014/02/16/can-the-economy-continue-to-grow-while-creating-fewer-well-paying-jobs-the-answer-is-yes/ 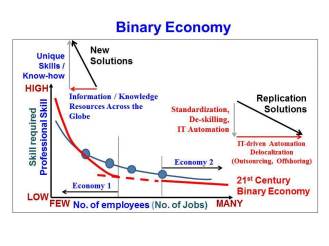 Globalization and shifting of jobs away from US are not the cause of our economic anxiety. Instead they are the effects or outcome of unrelenting use of IT tools by the investors to reach and leverage all low cost resources from across the globe. Even the few jobs available within the USA are getting stratified into impermeable layers of low wage jobs (for physical labor and information work) and better wages for professional work. Few well-paying jobs and lots of low wage jobs will be the reality for foreseeable future as IT systems, robots and drones take a larger chunk of available work. For the few well-paying professional jobs college degree will be an asset. But not every college graduate will get or keep these professional jobs. There is a growing gap between the wage and non-wage income, the later going to the 1% of the society.

The above are the economic realities. They are the direct and sweeping outcome of relentless growth in Digital Technology (commonly and inaccurately referred to as “Technology”) and their applications commonly referred to as IT. This sweeping change and its impact is like the life before and life after electricity!

Intellectuals and think-tanks have to boldly articulate this fundamental reality sweeping across the globe. Increase in labor productivity enabled by Digital Technology does not and need not automatically translate into higher wages for all workers. Blaming only the Wall Street or the immigrants or specific groups like unions and even failure/in-action of the POTUS, Congress or other establishments is truly futile. They are pathways –wiring – through which the emerging Binary Economy takes foot hold. Such blame game is similar to those living in the age of candle light blaming the changes in the society on everything but the role of electricity as a General Purpose Technology.

Of course one cannot go out and say that Digital Technology is your problem and deal with it. Electricity can illuminate the room or cities instantly at the flip of a switch. But electricity can also electrocute and kill large number of people instantly. In the case of Digital Technology the killing is more of economic starvation of the many in the middle class through the Binary Economy at the benefit of a few (1%). This impacts every one, but the pain and suffering is most acute today (after four decades of brewing) for certain demographics who populate the campaign events of Mr. Sanders and Mr. Trump. This does not imply any false equivalence between the economic reasoning of Mr. sanders and the raw emotional appeal of Mr. Trump.

As a society at large we have learned to adapt and use the electricity wisely. There are rules and regulations on the proper use of electricity. We have codes and standards to be met. Meeting such standards is not a personal choice. Do we need such economic safety standards for the development and use of Digital Technology enabled tools and platforms?

At an individual level every professional – wage earning worker – can become aware of the Binary Economy and how to cope with it through a set of Transformational Skills as outlined in our book.

The questions for any campaign are: Do they get it? Do they truly comprehend the role and impact of the emerging – and now well established – Binary Economy? If yes, what policies do they advocate for managing the development and deployment of Digital Technology that will help to alleviate their negative effects (Collapsing middle class and more people being pushed into low skill and hence low wage or no wage growth replication solutions)? Answers to these questions and articulating them effectively will lead to policies and programs to successfully deflate the economic anguish valiantly articulated by Senator Sanders and quell the anger fueling the Donald Trump campaign.

POTUS has rightly pointed out that ISIS is a bunch of thugs with social media. We need to recognize Social Media as a product enabled by Digital Technology. Electricity requires physical connectivity – wiring – for transmission of power and energy. Digital Technology enabled social media and wireless communication require no such connection. Hillary Clinton has rightly pointed out that encryption technology (used in the mobile digital devices) has to be worked out between the Govt. (to protect the people against terrorists) and the IT Sector leaders (who claim to protect the privacy rights of individuals). But HC campaign has to move further to explain how the individual rights and societal good (safety and security) go hand in hand? If they are inter-related how does one navigate through these polar opposites imposed on us by Digital Technology? Any defective car – that kills a number of people – will be pulled off the street instantly. Why do we not impose the same standards for the use of social media tools?

The role of Digital Technology is also evident through the 24 hour news cycle, social media and the relentless tweets. Once created they also serve for relentless repetition and digital re-wind of the same statements or images without any new additional information or fact. The political pundits and the main stream media and the intellectuals (in colleges and think tanks) need to get out of their comfort zone and stop repeating the same opinions as conclusions.

Today investors, political leaders, intellectuals and pundits and the main stream as well as the social media are the beneficiaries of the Digital Technology, while the rest of the society pays the heavy price. Soon they will also pay the price as well, as the US economy declines into an unsafe consumer-less economy. One can be certain that will not be the end result. But we can get there when we as a society learn to manage the Digital technology and its use as we have learned to manage and use electricity wisely, safely and with individual responsibility guided by suitable rules and regulations.