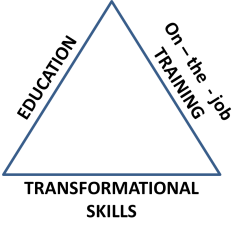 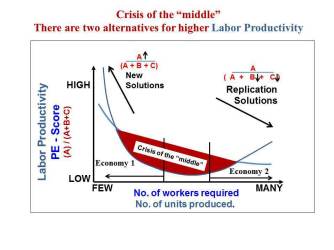 The article titled Election 2016: The men America has left behind, in the CNN – Election 2016: Your money, your vote section is misleading on many ways.

In the first place, America did not leave behind any one. America as a nation is made up of people, who work in the country and get paid for AND the business men who run the companies and employ these workers. So, the article should be titled: The men that American businesses have left behind.

America is not a socialistic or communist country where everyone gets taken care of by “America” (i.e.) the US government and hence the POTUS and the US Congress. It is a Democracy – of the people, by the people and for the people. Hence the more appropriate title may be: The men of America who let themselves to be left behind. These American men were happy to be paid good wages as long as they had a job where they could use their physical labor in the factory floor. This is very well illustrated in the GE commercial: https://www.youtube.com/watch?v=3xGoBlI_fdg These skills – the muscle power – has always been available everywhere across the globe. Being born or living in the US does not guarantee the use or need for these skills. These men always used their brawn, but never used their innate skills to think and analyze what is happening around them. They let business men like Donald Trump take their jobs across the globe. Now they are being conned by the same business leader to think that it is everybody else’s fault, except theirs. The focus is on men only because there were more men than women using their brawn in our factory floors. But, the issues and being conned are the same for the women as well as the men of America. Also these men were idle or willing to let the state governments weaken the unions and their bargaining power, while the crony capitalism was also growing. Democracy does not succeed if the voters do not exercise their vote or uneducated on policies that affect them or swayed by cable news and radio talk shows and reality TV.

The title could also be The Men of America left behind by “Technology”. It is sad but true that everyone has been conned to accept that the word “Technology” stands for Digital Technology or IT. This technology is useful to take the power of information away from many people into the hands of a few. This has dramatically reduced the number of white collar jobs. This impact has been largest in the US first, but it is sweeping its impact across the globe. With the automation of information the men of muscle power could also be replaced by lower cost labor from Mexico, China, … all padding the pockets of business men like Donald Trump, with more profit. I

The title could also be The Men of America left behind by intellectuals and policy makers across the globe. The word Technology stands for integrated use of Science, Engineering and Managnment in any discipline. While America continues to make progress in a few other technology areas besides IT, the time and investments needed in many more technologies – for alternative fuels, clean air and water, controlling the global warming, space exploration, under water exploration, eradicating hunger, thirst and poverty across the globe, peace through prosperity in Middle East, …. – is far less than the jobs being taken away by the relentless use of IT in the current work place.

The title could also be The Men of America being misled by Donald Trump. No matter how much Mr. Trump promises, he cannot make America great again, by forcing US businesses to “make” things in America. It is only a matter of time that some manufacturing jobs will be returning to US due to natural economic forces (with or without Mr. Trump). But, they will not be for these men of muscle power. They will be for the few who with skills to work in an automated factory floor with robots and AGVs and networked machines and systems.

May be the title can also be The Men of America who think college education is their savior. This is the myth propagated by the media and fueled by free college for all by Mr. Bernie Sanders. College education, even if it is free may not be the answer for a large majority of American workers. Yes, it is a definite pathway but only for a few.

May be the tile could be Men of America who are not learning some skills – to be a solution provider – for locally accessible jobs. Following quote from the same CNN Money article is relevant here:

Meanwhile, unlike some of his fellow factory workers, Cavins is determined to get a good job. He’s betting that a yearlong course in industrial maintenance will give him the skills needed to work in heating and cooling services, which his online searches found can start at $40,000 a year. He’s willing to leave Scioto County and work anywhere … in a hospital, factory, school or water supply facility, for instance. One day, he’d like to start his own business. …… The program, offered at Scioto County Career Technical Center, costs nearly $10,000 and has placed 95% of its graduates over the past two years in jobs that typically earn between $31,000 and $40,000 annually. To finance it, Cavins received a federal Pell Grant for $5,900 and took out two loans.  ….   “I didn’t think I’d get anywhere without learning a trade,” said Cavins, who graduates in September. “I want to give my family better than what I had. I want to try to break the cycle and not live on disability.”

May be the title could be: Men of America that the country and US policies left behind, due to crony capitalism, Republican obstruction in the Congress for infra-structure investment and false hope on higher education at the expense of free or affordable training for employable skills development. Perhaps for the time left before the November election, the presidential candidates can propose and develop support for such training. Community Colleges in collaboration with local companies and employers can offer such training. The companies who collaborate on such training can be given tax subsidies as their incentive? Free community college education proposed by the POTUS can be for such targeted training and not for open ended education?

For more details on how these men – working middle class – were left behind, please read: The System Approach – A strategy to survive and succeed in the global economy  ;