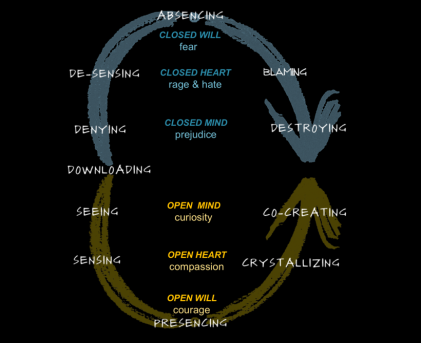 In the essay On the making of Trump – The blind spot that created him, Otto Schammer describes in great detail the psychological pathways to comprehend and cope with the reality of the election of Donald Trump.

Otto also suggests Economy 4.0, Democracy 4.0 and Education 4.0 as the pathways looking into the future.

It is good to analyze and suggest solutions based on Psychological and Sociological frame works. But the fundamentals that describe our current conditions are: low wage jobs, inadequate high wage jobs, concentration of wealth among the non – wage income earners (make money out of money and real estate). These lead to a fear of the future and a desire to cling on to anything (including the false pretenses and false promises of Donald Trump). They may be the same drivers for Brexit and other development across the globe. These drivers and the resulting fear have to be acknowledged first and addressed forthrightly by all nations across the globe. This is not Democracy 4.0. Instead it is economy 4.0. where Otto suggests an economy that addresses the well being of all.

What does economy 4.0 mean? Economy is never egalitarian. It is the survival of the fittest. In order to conceive of an Economy 4.0 we must accept the ills of the current economy.

Ever since the evolution of Digital Technology and its many aspects (automation, globalization, outsourcing, off shoring, Artificial Intelligence, …) we have been depleting current jobs faster than we have been replacing them. This has been progressing since the 1970s (which is now more than four decades in the making). Investors (including Donald Trump) have been at the fore front of this devolution.

Conversion of all fixed cost to variable cost has been enabled by Digital Technology and its capabilities. Good income high wage professionals were seen as “fixed costs” and replaced by outsourced and off shore workers in all levels and with all educational backgrounds. We have been depleting these jobs faster than we have been replacing them through new developments and new solutions based on science and engineering (often called as STEM jobs). It is not always the case of these jobs being moved abroad. Cloud computing is the rage today (where you can do all your computing, without investments in Servers and storage hardware), but its impact is to outplace thousands of IT professionals in MIS departments across the country today. Manufacturing jobs that return to US will be highly automated and may not necessarily create the large number of jobs expected. Even investments in infrastructure development are not likely to create a humongous number of high paying jobs as these activities are also highly standardized (de-skilled) and automated (mechanized).

Investments and developments in renewable energy created few such new job opportunities. Presenting them as alternatives to fossil fuel jobs has created an unhealthy condition of pitting one industry against the other and also one party against the other (Republican Vs. Democrats).

The solution is not to offer free college education, more safety net or living income subsidy for those without jobs. Instead it has to be a reversion to massive investment to create “New Solutions” leading to high wage jobs. This could be hundreds of Tesla and SpaceX making five wheel cars, three winged planes, … that accomplish things for better living than we can not even imagine today.

This could also come from taking on world problems such as drinking water, food and nutrition, climate change, better living conditions for the billions who live under poverty and upgrading their quality of life. These solutions – developed through science and engineering – will lead to massive good paying jobs in USA first and their commercialization to increased jobs world wide. But this does not merely imply more college degrees as we know of them today.

The above Economy 4.0 will not happen until the Republicans stop thinking that Govt. has no role in creating such economy. It will also not happen if Democrats continue to think that Govt. is the primary source for creating this Economy 4.0. It requires both and not either one acting individually. The public sees this inaction – as the failure of the “establishment” – and may be also sees Donald Trump as an arbiter (mistakenly as the case might be – only the history will tell). It is this conundrum that we are faced with in USA, which is also seen as the struggle between the conservatives and progressives across the globe.

The author (Otto) suggests and Education 4.0 – an evolving educational systems toward freely accessible infrastructures that help individuals, communities and multi-stakeholder groups to activate the deep human capacity to co-sense, co-shape and co-create the emerging future in their own context any place and any time.  The suggestion here is to create ability within individuals to define and develop their own jobs and eventually expand this skill across fellow professionals and communities in which they live in. Such education requires certain core skills. Return of trade schools to H.S. education and access to more community college education proposed by Hillary Clinton were good initiatives. Unfortunately they are likely to be jettisoned by the new Trump administration.

Education 4.0 also needs a structure and frame work. We call them as “System Thinking and Transformational Skills”. System Thinking is the ability to look at the picture (and not get fixated on the pixels) on the screen. It is a natural capacity to frame any problem and develop solutions based on the understanding that the whole is larger than the mere sum of its parts. This capacity for system thinking has to be backed by Transformational Skills (i.e.) an ability to combine academic (STEM) education together with its tools of Science, Engineering and Management as inter-disciplinary and interactive set of core capabilities. Such education on defining, developing and deploying new solutions may have to begin at the H.S. level and continue through the college education, in order to support the Economy 4.0 outlined above.

Majority of the voters from the Midwest who elected Donald Trump are non-college educated from the industrial “rust” belt. If the Economy 4.0 and the Education 4.0 as described above do not evolve, these voters will be the ones who will suffer the most. How does one educate the Trump administration and the Republicans to push for Economy 4.0 and Education 4.0? How does one re-focus the social policies of Democrats (Free college education, higher minimum wage, …) to align with the above needs of Economy 4.0 and Education 4.0? What role do the voters and public at large have in the re-alignment of both the political parties and the elected officials? These are the challenges faced by the nation. May be this is the Democracy 4.0 that we need?