In his essay The Populism Perplex, Mr. Paul Krugman describes the sad reality that Secretary Clinton lost the POTUS election despite her winning over 2 Million of popular votes than the PEOTUS Donald Trump.

Mr. Krugman  describes this reality as a result of news media spending very little time on policy positions and explaining the fundamentals of the economics at work. He conveys his sense of disbelief while explaining the economy and job situation in Kentucky where the uninsured for health care are far fewer today. The jobs lost in the coal country are due to shifts in methods of mining (from underground to surface layers) as well as due to cheap natural gas through fracking. Clinton lost Kentucky heavily when she spoke of this reality and promised to replace the lost jobs through new jobs through renewable energy.

Mr. Krugman concludes:  To be honest, I don’t fully understand this resentment. In particular, I don’t know why imagined liberal disdain inspires so much more anger than the very real disdain of conservatives who see the poverty of places like eastern Kentucky as a sign of the personal and moral inadequacy of their residents. One thing is clear, however: Democrats have to figure out why the white working class just voted overwhelmingly against its own economic interests, not pretend that a bit more populism would solve the problem.

We would like to offer a few thoughts to clarify the situation.

Income can be through wages and non-wage income (through real estate appreciate and making money off money). This is 99 % Vs. 1%. Deriding this gap serves no one any benefit. This grip of the 1% on the 99% can be lessened only though higher taxation of the 1% for the benefit of the 99%. But sadly the country has elected one among the 1% as the next POTUS. This is like hiring a fox to guard the chicken coup.

The 99% make their living through wage income. As we have described in the past, any wage can be earned only through one of three avenues: Professional Skill (ability to develop, deploy and implement a new solution – one could describe this as “Brain power”), Information work (to collect, process, analyze and disseminate information  – one could call this as “Pen Power”) and Physical labor work (one could call this as “Muscle power”). Of these three today one can gain reliable income through Professional Work. Even this situation is precarious as the physical effort and information work content are being depleted routinely through relentless application of Digital Technology and its uses.

The pen power and the muscle power have been diminished substantially as the sources of income through evolution in Digital Technology. This is well understood and well documented in many places. These jobs have literally fallen off the cliff.

How did we get here? Any organization – place of work – is described as a pyramid. The bottom of any Organization Pyramid is made up of labor work force. Above them are the information workers and then the professional workers. In any organization we use a pyramid to depict that for good reasons. There were always more non-college educated labor workers. The number of college educated white collar information workers is fewer than physical labor workers. The number of professionals required are always far fewer than the other two categories. These work categories have been increasingly stratified since the advent of Digital Technology and its evolution since the late 1970s.

But when these categories are clearly stratified and mobility across them is limited or eliminated (thanks to the standardized nature of work) now we have the highly divided and polarized America. Most of those with college degrees and professional work live on either coast (East of I – 95 and West of I – 5 corridors) and the rest – non college educated and mostly white, who have lost their jobs in information and labor work, live between these two highways.  Indeed these are also the two polarized groups which have supported Secretary Clinton and Mr. Trump respectively.

But this polarization and support for either candidate is not directly correlated to the level of employment as noted in the analysis reported in Fivethirtyeight.com. Instead it is far better correlated with the standardized or repetitive nature of nature of work. More routine and standardized the job, the voter support went for Mr. Trump. The majority of the voters with their work content that is least standardized or routine overwhelmingly went for Secretary Clinton. 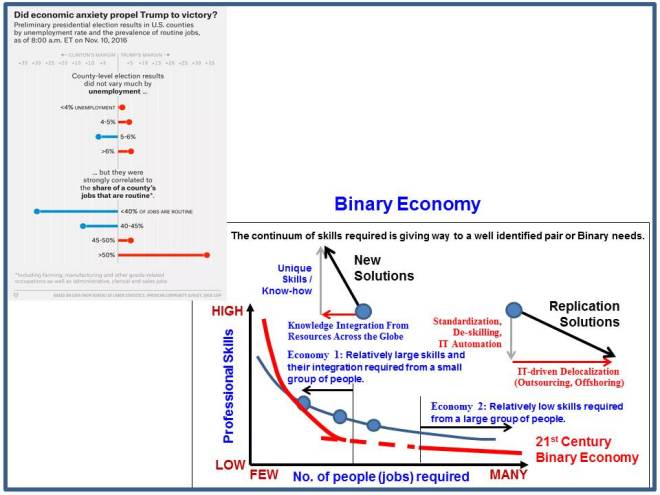 What does this voting pattern tell us? It seems to be directly linked to what we have described as the Binary Economy!

Jobs or wage earning work at any level of skill can be standardized and hence de-skilled using Digital Technology tools. This de-skilling of work can be seen at any job and in any industrial activity and in any sector and in any region of the country. Such de-skilled jobs can also be automated and outsourced. What is left can command only low wages and often below the minimum wage. In these de-skilled jobs the power of the union is minimal as their contribution though skills that cannot be replaced is constantly reduced or eliminated. Industrial Midwest and much of the nation between the east and west coast has not found ways to replace these jobs with higher skill level jobs.

There are few opportunities where the worker can integrate knowledge from many sources and hence offer higher skilled and higher value addition. This knowledge integration is not a matter of higher education alone. While higher education and college degrees help, that is not the minimum requirement. Instead an aptitude for discovery of a need, developing a solution and implementing the same and get paid for that is the new skill required.  The startups culture and the entrepreneurship in the East and the West coast foster such on the job skill development. These are also the voters who see new opportunities in Globalization, alternative energy sources, solutions to counter global warming, etc.  These are the voters who have overwhelmingly voted for the Democrats.

The above skills development are not the Republican or Democratic priorities. Instead these are the priorities of those seeking high wage jobs and better incomes. But Democrats need to find ways to promote such skills development that supports and fosters the “Economy 1” in the Binary Economy model displayed in the figure above. This skill development cuts across all genders, races and economic levels. This new skill development has to be seen as the new Democratic priority. In this respect Senator Sanders’ call to Democrats to go beyond identity politics is correct. But his call that” understand that working-class incomes are down, and “stand up to Wall Street, to the insurance companies, to the drug companies, to the fossil fuel industry” may be dubious at best since these are obvious action steps without outlining the fundamental reason (i.e.) the relentless need for new skills development and investment policies that will draw on these skills with new job opportunities and solutions focused on that.

Returning to Mr. Krugman’s comment: “To be honest, I don’t fully understand this resentment. In particular, I don’t know why imagined liberal disdain inspires so much more anger than the very real disdain of conservatives who see the poverty of places like eastern Kentucky as a sign of the personal and moral inadequacy of their residents. One thing is clear, however: Democrats have to figure out why the white working class just voted overwhelmingly against its own economic interests, not pretend that a bit more populism would solve the problem”.

The resentment of the voters is not liberal disdain or affirmation of the conservatives. It is certainly against their economic self-interest. It is like the person sinking in the lake grabbing on to any straw no matter how flimsy it may be. Mr. Trump’s promise as an “outsider” to create new jobs and stop the bleeding of jobs from USA through trade agreements are the flimsy straws for the voters who see their demand for their skills – through muscle power and pen power – depleted. Either party that sees the real underlying causes – the polarization of jobs into few high skilled jobs (with decent wages) and large no. of low or no skill jobs (with constant spiral of diminishing wages)  at all levels of the economic activity – and finds answers for that will be rewarded in the long run. In the meantime the elections will be just toss ups governed less by rational choices and more by emotions and irrational events such as hacking and Comey letters.

As we have often said in our columns, the individual workers need not wait for politicians to figure out the evolving Binary Economy and the solutions for that. Instead they can seek out and learn skills for new solutions development. We call these new skills as the System Thinking and Transformational Skills.