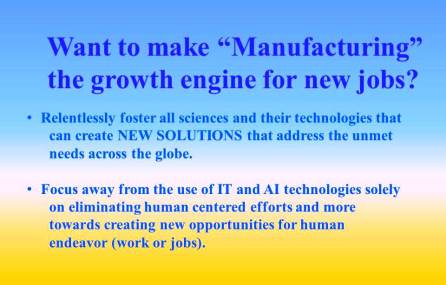 President elect Donald Trump’s efforts to shine light on Carrier Co. and their limitation of jobs might have one silver lining, although it may not be what he seems to suggest (i.e.) he as the POTUS can retore US manufacturing jobs. It is reported that  Carrier Co. to ultimately cut some of jobs Trump saved

The company’s deal with President-elect Donald Trump to keep a furnace plant from moving to Mexico also calls for a $16 million investment in the facility. But that has a big down side for some of the workers in Indianapolis. Most of that money will be invested in automation said to Greg Hayes, CEO of United Technologies, Carrier’s corporate parent. And that automation will replace some of the jobs that were just saved. “We’re going to…automate to drive the cost down so that we can continue to be competitive,” he said on an interview on CNBC earlier this week. “Is it as cheap as moving to Mexico with lower cost labor? No. But we will make that plant competitive just because we’ll make the capital investments there. But what that ultimately means is there will be fewer jobs.”

We have described in detail this migration and transformation of the “Manufacturing work” in one of our earlier blog posts under the title “How to bring the manufacturing jobs that are never coming back”. It cannot be achieved merely by blaming Trade Agreements or past government policies. Certainly it cannot be achieved merely by blaming the CEOs of Carrier or Being Co. or the union leaders that Mr. Trump thinks of as his whipping boys for the day.

“You can’t just blame cheap labor [outside the U.S.],” said Dan Miklovic, principal analyst with LNS research. “Certainly many of the jobs that we’ve lost, especially in more sophisticated industries, it’s not so much that they’ve been offshored, but it has been automation that replaced them. We use a lot more robots to build cars.” Altogether, U.S. factories are actually producing more products today than they did in the post-World War II era, according to the Federal Reserve’s reading on manufacturing output. Output at U.S. factories is up 150% in last 40 years. But U.S. manufacturing jobs have plunged by more than 30% in that same period. And automation is a big reason why.

The above suggests that the US labor has been producing 50% more output with 30% less labor. A simple math would suggest that US labor has been doing such a good job that the manufacturing labor productivity has gone up by 114% (= 150% output put with only 70% of labor needed). But to gain even more employment at this higher level of productivity US will need to produce and sell 214% more than we did 40 years ago! Unless these products can be consumed inside of USA at the current prevailing prices the US will be required to sell them to other countries. How can this be achieved with the Trump administration’s position opposing Trade agreements? Senator Sanders has been equal contributor to this fallacy.

Let us be clear about something else. Not all of these productivity gains have come thanks only to better worker skills. If that were the case the workers can walk out of their jobs and the manufacturing plants will come to a screeching halt. That was the power of the labor 40 years ago and hence the strength of the unions. That is not the case today. We discuss this point in more detail in our essay: Do Americans really miss the unions? It is true that few workers are better skilled and contribute far better than their peers 40 years ago. These are also the among the college educated workers – with minimum of associate degree from Community colleges – working mostly in the two coasts and the few newly industrialized manufacturing centers in the South and the Midwest. These are not the voters in the industrial mid-west without higher education (or even H.S. Degree). These “higher skilled” workers are not large in number or concentrated in a few places to have the strength necessary to force higher wages through unions and their demands. The challenge is to train and educate more of these skilled workers so that they can acquire and maintain higher paying manufacturing jobs on their own. This is not more of the same education leading to the suggestion from a professor of Chemistry “It may be a mistake to get a degree in Chemistry, unless you have also figured out how to use your knowledge!”

And it’s not a trend that’s going to end with Carrier or even with manufacturers. A recent study by McKinsey & Co. said that 45% of the tasks that U.S. workers are currently paid to perform can be automated by existing technology. That represents about $2 trillion in annual wages.

If you take the above data and through simple math one can conclude that the US manufacturing has to reach 400% of our production output to maintain employment parity that existed 40 years ago. This does not take into account additional increase required to account for our modest population growth.  This also does not take into account additional developments through Digital Technology for further automation. Information technology, which will continue to deplete the need for manufacturing labor.

Where will this new production come from? It cannot come by simply producing more of the same. 400% of manufacturing production in US over 40 years ago would suggest that all manufactured goods are made in US and everyone else in the world will merely but what we make! This Utopian view of the world is foolish at best. Hence it implies US has to conceive and produce goods and services for the unmet needs that other countries can not produce today.

These unmet needs to be full filled can be for consumption in the US and better yet for all the unmet needs across the globe. This has to start with our redefining the commonly used term “Technology”. Everyone in the media, leadership, think tanks make the same mistake by addressing developments in IT (Broadly in the category of Digital Information Technology) as the Technology.  Look at the parent Co. of Carrier (i.e.) United Technologies. The word technology here refers to jet engines and air conditioners. It does not imply IT in isolation. For more details see: Managing the role of Digital Technology: Life before and after electricity.

Why is this important? There has been relentless effort to improve and enhance the efficiency and productivity of human centered activities in the past 40 years using IT / DT. Progress in automation and AI are merely focused for furtherance of the same. The resultant depletion of human center activities (jobs) are being lost at a far larger arte than any new jobs being created. For more details see: Understanding the voter resentment. The only way to reverse this trend is to emphasize as a nation – and across the globe – the need to focus on

The need for such expansive role of new science based initiatives (the true meaning of the word “Technology”) is not fully recognized. For more details see: Dwindling gains in Science, medicine and technology in the WSJ article.

But the WSJ report suggests that we the US population is some how risk averse. This is far from the truth. When the new technology is an acceptable alternative US as nation is the first to accept the risk and embrace the change. But these businesses and services based on new science based technologies will not take off without substantial initial investments to foster them through Government initiatives.    We should be honest to admit that US auto industry would not have succeeded without the Highways and freeways built across the nation by the US Govt. The same auto industry would not be viable today without the Govt. intervention of the 2008 financial crisis. The same can be said of aerospace industry and the role of government funded defense contracts supporting many basic research projects.

Our reliance on IT to reduce jobs and increase labor productivity has been the untold “Opioid crisis” in all our economic activities. It was prescribed as a solution to over the labor cost issues in the late 1970s. Now it has become the crutch and the only medicine consumed by CEOs across all companies and in all sectors to reduce labor cost year after year to keep their balance sheet look attractive to their investors.

The above two prescriptions for increasing the manufacturing employment have to become the corner stone of any policy advocates as well as the fundamentals for any administration that truly believes in restoring US manufacturing and increased jobs as a result.

Reagan, Clinton and Bush administrations complexly missed the boat in terms of the above two prescriptions. Republican ideologues who want to keep Government out of everything they see as  interfering with “free market economy”have thwarted most of President Obama’s efforts in this direction, every step of the way. Democrats who see the need are not clear in their vision or vocal to articulate the need for real growth in new jobs. Instead they offer platitudes in terms of free college education and more manufacturing jobs (without a clue on where they will come from).

The CEOs have also a role to play. After all they can not continue to cut  jobs and look good in their bottom line in the long run.  Recall the comment by the CEO of Carrier Co. quoted earlier? “We’re going to…automate to drive the cost down so that we can continue to be competitive”. He did not suggest investing in more new products and services that can increase employment and also improve his company’s performance bottom line in the long term!

If the policy planners and administration will come to such consensus is anybody’s guess. In the meantime individuals should take the matter of their jobs and careers in their own hands and develop strategies for the same on their own. Transformational Skills for success in the 21st Century Economy.